It’s rather strange to believe that at the age of 59 & 4/12ths I should receive a report about my academic progress here on WordPress, apparently a mental arithmatic question with the answers awaited my perusal as did a “colour blind” test chart depicting my post patterns during the short *term* period I enlisted myself upon in this syllabus, many search engines provide my whereabouts along with the infamous GPS system attached to my virtual shadow, which was of course inspired by author George Orwell with his book entitled “Nineteen Eighty-Four” a story of “big brother” constantly surveying everybody’s movements and positions.

Furthermore, it would appear the majority of the *spies* reading my “diary inserts” hail from the Northern Hemisphere, USA & Canada, and a few dear friends here in the U.K.  Now its steadily becoming more like a James Bond type novel, I have no hesitation in sharing my life’s antics, and maybe the title to my famous, not yet finished blockbuster should be entitled “London Skylines”, so, as at the end of any school report there is always a damning remark from the *Headmaster/Principal*, yes, you are correct Sir, “I MUST TRY HARDER”.

The condensation pours down on the inside of the window overlooking a busy pedestrian walkway, its getting darker outside, seasonal music and song is being playing on a radio by generic artists and a band that was once possibly directed by Les Dawson.

Nice for a change to be alone in this coffee stop, no children, no one else, the proprietress attentive as usual, along with my cup, pot of tea and a tiny jug of milk, was a homemade Mince Pie, of which I hadn’t placed order, I mentioned same,  and the reply was returned with a smile and a wink,  not only was this my first Mince Pie of the season it was also a gift.

Now as a nearly sixty something, I didn’t know wether this was because she may have felt sorry for me, or because I paid for the tea in ten pence pieces, or the pie was the last of today’s stock, however, I started to consume this item with a glow in my heart, and then I noticed the liver spots on the back of my wrinkled hands and the deformed gnarly right forefinger, an early victim to progressive arthritis, out of the corner of my eye i spotted an elderly gentleman with unkempt hair and an attempt at a poor grey beard in the reflection of the interior shop mirror, our eyes met and I instantly took a shine to him, briefly realising that this elderly man was infact myself, I chortled, just like my Father used to and I started to remember …… of many years ago ……

Twenty plus years ago I wouldn’t have had time to take refreshment in a coffee shop, I would be working stupid hours just to keep myself above the bread line, I always worked right up to the Christmas Eve eve, and then all of my celebrations and preparations began, the time crux was picking up my beautiful daughter at 6pm from her mothers, we did not part on good terms and the divorce was hell, I was taken to the cleaners, she had a bloody good lawyer, the bastard! If I arrived too early, I had to wait, on the doorstep, if I was late, I had no chance, infact, she, the mother was not reasonable.

During the day I had shopped for my famous Christmas eve roast and presents and the newly delivered pine tree was still in its nylon stocking on the hallway floor, blocking all access to the first and second floors to my flat, it was ritual that we both dressed tree together and then cooked. The house was a bomb site, a bucket with soil and stones was used to erect the tree, badly, as we found out during the progress of the evening.

Finally all was ready for the celebration and we finally ate our roast at 2am, only then and when my Princess was in bed could I start to wrap the presents, we’d go through a routine of waiting to hear Santa Claus outside and then she would fall to sleep.

A bottle of port stood on the side, so, after pouring Santas glass, I then approached the remainder of the bottle with cheery gusto, steadily the presents got pushed to one side and remained unwrapped, its quite embarrassing when you wake up out of a drunken stupor many hours after your child had been awake with excitement as it being Christmas morning, only to find all the presents were wrapped, my daughter never did tell me the correct answer to my question as to who did that.

And now, since then, every year I am ready, menus planned, list compiled and this year, there are fourteen days to go, I have posted all my cards, put the tree up and turned my kitchen into a set from Nigella Lawsons TV Christmas show, the presents are in special gift carriers and Im now sat waiting eagerly for the big eve, sadly my daughter is now with her live in boyfriend miles away, my son, buried, as are my parents and my dear dog is no longer at my side, I wonder now, what on earth is this all about?

And that is now why I share my spare time with an other who is my rock and my family, he is, and will always be here for me, that i know for sure and his four pawed pups, we are both trying to believe in a higher plane, its taking me time to try and accept this transition, but, eventually I will get there.

As I fall asleep, I pull many happy memories out of my central file system and smile, just like it was yesterday, and sometimes, my dreams continue those thoughts where I relive them with familiar recognition … I am happy now …. 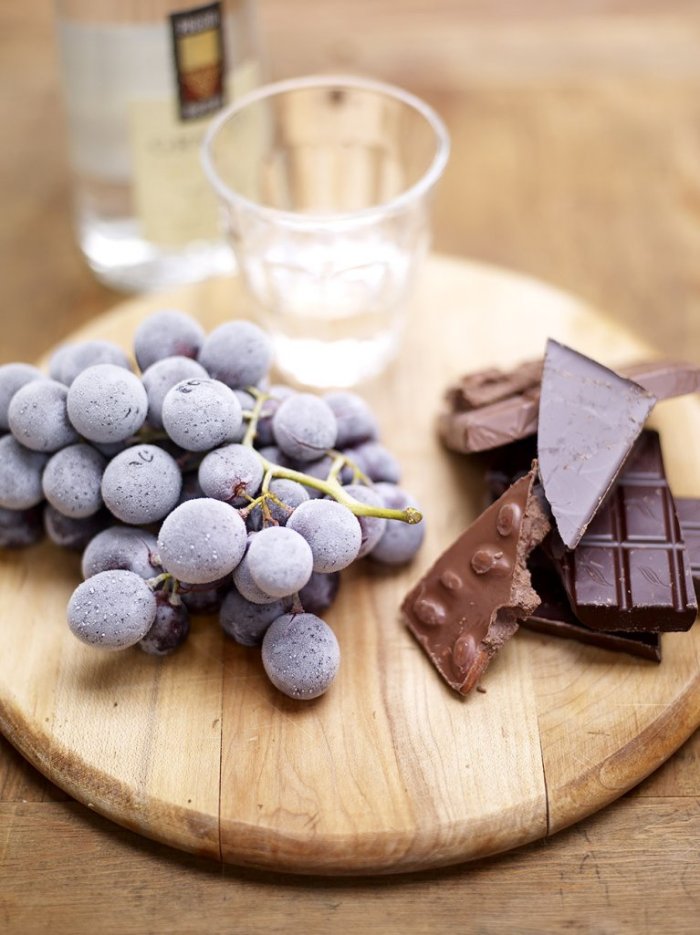 Last evening, my very close friend Chris, promised me a new experience, courtesy of a British TV chef, being from the same County as this likely lad, Essex, I assumed that he thought this would be great fun, infact at the time it was.

1 Bar of Quality Chocolate with Nuts

Place Red Grapes on a tray in deep freeze for approx 4 hours, break the bar of chocolate into bite size pieces and prepare the shot glasses for the Sloe Gin.

Put grapes into serving bowl, and place upon wood platter along with chocolate pieces, stand the two glasses adjacent and fill to the brim with Sloe Gin, offer your guest a glass and raise a merry cheer after your bottoms have chinked together, that is NOT a euphemism either. The idea is to sip the Sloe Gin and savor the flavours and experience the textures and not to neck it down in one like a pig, alternate, grape, chocolate, sip, fill glass, grape, choc, sip, sip, grape chocolate, sip sip sip, fill glass again, gulp, chuck, crunch, sip sip, (one more I asked?) fill glass yet again, and neck it down in one.

Steadily wobble off to bed and die for eight plus hours, awaken with the mofu [1] of all hangovers, sign pre-declaration to promise NEVER to take the gin again ….. Or until the next time period !