I really must apologise for my absence here on WordPress, there is no reasonable excuse apart from the fact my decision is to enjoy our well deserved holiday without any external or internet intervention.

Do you know just how hard that is?

The yearn for another glass of wine after the bottle has been squeezed dry? The need to light up another coffin nail (if you happen to smoke, fortunately I do not) than noticing the pack is empty and finally, to actually hammer that virtual nail in, after walking down to the off licence in your slippers finding the place is closed or the uncontrollable desire to do something habitual with your hands when they are tied behind your back, metaphorically speaking.

Anyway, I’m moving away from my original point, we have made the unanimous decision that tomorrow, Monday, is to be a free day.

Nothing has been forthcoming from my busy brain, I am having a difficult time lowering myself into a horizontal position from the constant interaction with the media recently.

Taking on something so huge as being a P R Guru for an unlikely duo, as previously mentioned, the Vicar and Undertaker Tour has proved arduous, and now midway through their peregrinations I have had to hand the reins to an understudy.

Saturday, Exeter Airport.  After being manhandled in Security we make our way to the departure lounge, via the viewing balcony, we have a beer and share a baguette, we check-in to MyFace and Twatter and sit a while, a snack was enough as lunch will be served onboard by the Thomas Cook inflight crew, pre-booking food is so much more fun, it has almost become a ritual, better than having to wait to see if there are any unsold snack boxes …

Eventually we decide to give the new selfie stick a test run of just a picture of us and our plane before heading down to the departure lounge.

It being nothing short of a domestic sized sitting room with a small shopping area selling duty-free items at extortionate prices and a small bar/kitchenette. Nowhere near as exciting and glamorous as the major international gateways spread around the United Kingdom. However, unashamed, we flirt with the lovely sales assistant who obviously required a new prescription for her glasses as she said I looked amazing and nowhere near my disclosed age.

Our designated gate is called, number three of four, as are also gates one and two at the same time, an absolute total free for all enthuse, six hundred and eighty passengers in a room no bigger than a triple garage.

Eventually we are allowed to cross the tarmac, no coaches or jet-bridges here to board our flight, just two scabby aluminium ladder tracks on wheels, one at each end of this giant double hairdryer. We hold back and wait until almost the last-minute to board, a dramatic entry is made, especially as we are seated right at the front, any closer and we would have been cabin crew or actual flight members. A wonderfully usual pearly white smiled greeting from the crew and we are welcomed aboard. We have first row seat across the aisle from each other, Danny and his team give the usual safety instructions whilst we taxi out to the runway … Chris orders Champagne, explaining its my 60th, and yes, yet more gushing and flirting! …. Yay … We are now zooming down the runway whilst the bottle is on ice chilling, seat belt signs are now turned off and table trays that magically appear from an arm rest are now in a ‘feed me’ position. bye-bye EXT, PMI here we come. 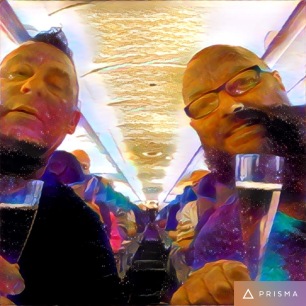 The whole of the day was spent travelling by car, plane and coach. Goodness knows how they used to manage to traverse back and forward across the island when there was no major route or highway and only using the donkey trodden paths and rocky trails. It would surely have taken a week just to get to this destination sited here at the opposite end of the island from Palma, the capital.

The hotel offers free wi-fi as do most other establishments in the small port here on the north point in Mallorca. There appears to be a very subdued atmosphere as most guests are head in iPhone or just being plain androidinous. There is no longer a hum-drum of conversation that once wore a battle with the sound of chinking glasses, cutlery, pots, plates and noisy waiters shouting and gesticulating to one another across a crowded plaça in their native language mix of Mallorquín and Catalan.

One thought on “The man in the linen suit … ”