Prepared and armed, and ready for a battle, I have eligibly written on a yellow post note the words “prochlorperazine/buccastem”, we take off, toward the already often trod Calle where the Farmacia is situated. We will probably be recognised from previous years, its been quite a common ritual forgetting things like these on our last few trips. The médico, enfermera o farmacéutico looks at the paper and puckers his lower lip over the his top lip and in doing so attempts to touch the end of his nose, he grunts, he grunts yet again, his olive tanned brow suddenly furrows .. “no es posible sin una prescripción señor”. Giving my sad puppy dog eyes an airing, he shows no leeway and shows his authority, this time with an affirmative “NO ES POSIBLE”!

Ah, mmm, ha! remembering from previous years, a remedy, an old trick. There is a German herbal drink which cures the mother of all fucker headaches in a bottle with a green top lid covered in wrapping paper called Underberg. Which, serving my memory well, was only available at certain selected shops ….. Eventually, after parading around a few establishments including a few tabaca’s the small “super SPAR mercado” bears the fruit I was seeking on the top shelf.

Outside the premises I hurriedly snap the top off the tiny beige paper wrapped receptacle and slug it back down my neck like an old desperate wino. The job is a good one, goodbye ‘morning’ sickness, hello world. Within minutes I start to feel brighter. Previous talk of a day’s outing was made before we walked past the excursion outlet, scanning the offers we sign up for a no-frills all-day Island Tour … Was Wednesday going to be a busy day? you bet the hell it was!

Better buy a hat I mention, strangely, we start to try these items of contention on, Chris models, adorns, and sashays his selection, a Panama. Me? I end up with a white adidas baseball cap … what a twat I look!

Walking back to our hotel we have to laugh to ourselves, there is a stretch of road, which we call the Calle de bankers, there is at least six ATM’s within a 150 metre span, why laugh you may ask? Nine years ago we bought my Aunt and Uncle out here for a week, a treat in return for them covering me financially whilst my dear Fathers estate was being finalised.

Quite a harrowing experience as there were expenses to be paid, I know that most Funeral Directors, and often Hotels where  a wake would be held are happy to wait for their accounts to be closed when the will and probate have been finalised. Both these, the undertaker and hotel owner were very close personal friends, so, Aunty Chris and Uncle Bryan kept foot of the bill until all cash was released, of course, they were paid, returned in full and as a thank-you we treated them to a great week here in Mallorca.

We all unwound and released some demons. Bryan was however insistent on checking the exchange rate Pound Sterling to Euro every day, in fact it became an obsession, sometimes twice or even thrice during a twenty-four hour period, so sad, as he had no reason to do so, as all expenses were paid for by my dear, now departed Dad.

Unfortunately, recently, after a short illness, Bryan passed away, and due to a family rift, I took the decision not to go to his funeral. It hurt me not to attend tremendously, I hate the occasion anyway and it just all seems so terribly final. So, today, Chris and I joke together that Bryan haunts the Calle de Bankers and his soul will not rest until he is told to do so. We shed a few tears at the same time, some of sadness, some of laughter and with great memory of this lovely person.

Most of the day is spent by the pool, me messing about with my auction bought Polaroid camera. A project I had hoped would bring great context to my weeks adventure. Instead, with a culmination of heat to the film and such awkwardness it takes a back burner, much to the delight of Chris, as he was obviously getting fucked off with it. Cant you tell by his looks?

Lunes, Media dia. Now considering I already had my fancy Panasonic digital compact with me and the ever faithful iPhone, I guess there was no real need for all that extra extravagance. So with reluctance I revert to plan B, carry on continuing to read “A Cat on a Hot Tiled Roof” the second instalment of a a six book run, or as some would prefer to say and often quote, a sextology. Author Anna Nicholas registers her hilarious adventures, a semi-retired PR consultant having once lived in Mayfair, now having jumped ship so to speak, and enjoying the permanent delight and magic of life in Sóller, Mallorca. Previous, having had some contact with her via the Twatter, I thought it best I to try to keep up to date with her story just incase we bump into her on our mega day out, of course, what would be the chance of that ever happening? Huh! Especially here, on the Island!

I strip down to my faux Burberry Bermuda shorts and head toward the ladder positioned at the deep end of the pool, lowering myself into the warm salt water like a fat German uBoat I eventually part submerge myself like an estuarine crocodile and slowly progress toward a safer depth. At my age, I have a fear of not being able to touch the base of the pool, my mind slowly empties of all clutter as I float about like a piece of old driftwood, rotting and partly immersed.

Somewhere, on a TV screen, in another dimension, I am Esther Williams, albeit somewhat on a bad day, yet totally oblivious to what is beyond the sparkling blue tiles that within contain this pleasurable activity.

Suddenly it occurs to me that it surely must be near lunch and definitely time for a rewarded libation, the monster from the lagoon ungraciously attempts to haul his carcass up the slippery steps. We order “Pa-amb-oli”. A favoured Mallorquin dish which consists of bread infused with tomato, garlic and olive oil, copious slices of jamon y queso, olives, loose hot green peppers and samphire. 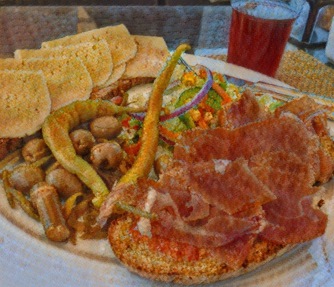 After a bit of a hissy fit from myself and a brief exchange of words (in catalan) the young waitress stroke pool side attendant returns with a real wine glass and she pours the contents of the plastic vending cup into it. It has now been noted that señor Stamp is “Sin vaso de plástico”.

Easy to believe, this gorgeous man once stood for hours in front of professional photographers and plied his talents to the sex industry, well, underpants to be precise, and as rightly so, correctly sectioned, in the Freemans & Grattan catalogues. Oh how I remember as a child sneaking a peeky look at those Adonides.

I have never seen him so relaxed, hence, all so rather sloppy, but I do adore him.

I have to hurry up with book number two as Chris is fast approaching the end of “A Lizard in my Luggage” and there is nothing worse than having to wait for someone else to finish the daily paper, that is of course my dears an analogy, if you hadn’t already guessed.

Earlier today I noticed some vehicular and personal movement out on the peninsula at ‘the villa los dos elephantos’. Two private helicopters, each with matching green livery land and take off independently, each after the other which I am sure gives great concern to the locals, is ‘he’ up to his old tricks again?.

Lunes, Nit. There would appear to have been some kind of development here at the hotel this evening. Hushed whispers were being exchanged whilst I talked to the receptionist and the scurrying of attention to room service to the cordoned off lift that is for staff use only seemed to endorse a fact.

A sign on lift door states “Only Level Cinco”, in my mind strongly indicates an entourage on the fifth floor.

Who?  We ask!  Are there Russians in the house?

There has been no sign either, today, of the man in the linen suit.

One thought on “Invisible Man …”