Martes, el 6 September 2016. That certainly was one hell of a disturbed night, what with the unusual heat and all, one could not but hear the constant sound of siren and loud conversation, at one point I stuck my head outside of the room and shouted down the corridor “pel bé folla tancar l’agafada uo” . . . all went silent for a while, but my offensive message was not taken to heed.

This morning brings a strong breeze and dark cloud to the eastern end of the Serra de Tramuntanas. This mountain range shelters our port, but shrouds Cala de San Vincenç, a busy mini Ibizan styled town which has that oh-not-so-bo-ho appeal, sedately she sits behind the mountain range including the beautiful butterfly Boquer valley and the drive to the Cap de Formentor lighthouse.

Today Pollença bay appears to have an extremely despondent atmosphere with a broken-hearted calm, which is rather unusual considering the direction of todays wind. 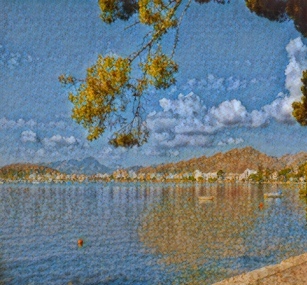 Preguntas. Consists of a small hybrid, fried and continental, neither of us consumed much due to lack of sleep and a noisy bed partner, or perhaps I should in fact state my room-mate. Another quick visit to the Farmacia was in order, on the other side of the street walking in the shade is the man in the linen suit, I nod to him, he doesn’t acknowledge me, he appears to be in his own world.

We turn the corner into the Calle de Formentor, I see him, and ensuring he hears me this time I raise my voice to an audible ¡hola! …. he intrigued me yesterday … I turn to Chris and mention “its the man in the linen suit yet again, , why didn’t you say hello? …”

What, where? he replies.

That man, the one in the linen suit, look, over there …

… and suddenly he has gone.

We beat a hasty retreat back down toward the tiny supermercado, a six-pack of agua sits on the dusty floor, its plastic carry strap sweating almost as much as ourselves, next stop our hotel and our own private intimate mini bar, as we place a litre bottle inside to cool, I can hear ‘spanglasation’ from the cream de leche purchased from the same establishment the evening before …. ¡hola! Qué casualidad verge aqui?

Martes, mig matí. The Zona Militar is situated on the opposite side of the bay at the end of the Pine Walk. It has just received an amphibious fire-fighting aircraft. The plane circled high once around the bay area before landing sharply onto the water and taxi’d noisily toward its onshore berth. They are often on exercise, but thinking about it now, they have probably completed a service run to the Spanish mainland where the Costa Blanca is bearing the brunt of the terrible fire-bursts inland.

We take a few spare moments of our time in hoping that this devastation has started to disipate.

Observations and conversation from around the pool from both of us consist of bitching about the northern woman who continuously whines on about how its far too hot. The young couple slathering each other in Factor 500 and then he disappearing whilst she sleeps under the noonday sun. Not forgetting to mention that the homosexuals are in residence around the pool, we have labeled them Mabel & Daisy, D sits tapping away at her airbook, sipping at one of the biggest Mo-fu of all Mojito’s through a red straw, I write “A M I N A G D” in my book, I sampled a ‘bigger’ one yesterday, fuck me, it split my head apart like a blow from a tomahawk. His significant other, yes, he with the badly Grecian’d 2000 temples is draped over the bar sucking up to the pool attendant, the only thing he is likely to end up with is a pocket empty of tips, there is no way on gods earth that Mabel will cop a feel. Daisy glances, sadly for him, that shop was shut many years ago. And NO, before we go any further, Mabel & Daisy are NOT a euphemism for the two of us. Although we are often referred to,  as the duke and duchess, mostly behind our backs, fucking nerve, i can tell you.

Martes, dinar tardà. There is a large melee of Lycra clad cyclists sat under the canopied shade around a large finca styled dining table outside the restaurant adjacent to our hotel. Such a rumpus, I believe they are possibly German, striding about in their footwear as if they were jack boots, their spikes match their black and green ensemble bearing corporate design ‘gear’ logos, they appear to be split into two teams, one fat the other thin, each of these an uneven number, both showing their allegiance to either the Roundheads or the Cavaliers, whatever, they remain absolute friends. 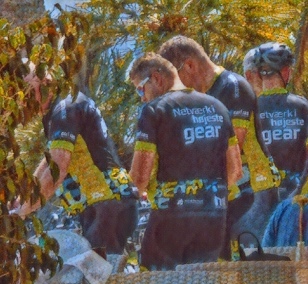 Suspiciously they wear Bluetooth ear pieces, but, there appears only to be a few bikes, certainly not enough for all of them, unless they are riding on the cross bars. Their behaviour is of extreme confusion, yet they remain vigilant and totally aware of their surroundings. Perhaps those of them who bear the gorgeous chunks on their hunks are part of the security posse on the fifth floor residencia?

Puerto Pollença could probably be labelled as the epicentre of the cyclists world and most of mallorca is famed for its great winding roads and of course the added attraction of playing the game of Toxic Narcissism with others at the same time.

To the left of me, under the shade of the building is a very mature woman, her hair grey, yet yellowing and slightly bleached from the ray of the sun. Wearing a flowing summer dress with a bold green and black floral print, not dissimilar to that of a maternity robe, probably sold to her as a misrepresented item, it covers her ample bodice.

She appears to be built not for speed, but ballast or quite possibly even as an obstruction. Her green brogues with gentle ladies low heels might possibly give her traction, it would also seem that this verdant colour was definitely her accesorio del día.

I can only state that she displays what might be described as “a big fuck off ring”, an enormous single white diamond that what would appeared could only be on a platinum mount, wedged tightly on the third finger of her left hand.

Through her tortoise-shell rimmed glasses I notice that her eyes are almost hidden by puffs of swollen skin, it tells me a suffering of endless tear letting from a recent bereavement. Obviously the memory is still sour, her guilty tortured mind holds tight many delicate truths. She fans herself with a preformed masterpiece by Duvelloroy, her mourning accentuated by the colour cerise, bright as a coloured marker pen.

Occasionally she lifts and wafts the fan toward her moist face, could this in fact be secret code whilst she constantly scans the plaça, is she guarding the cafe entrance into the hotel or is she on the lookout for someone, a friend maybe, an old companion or possibly even a lover.

Martes, capvespre. When something or somewhere becomes familiar, you tend to take to a favoured seat or if possible same viewing position. If you are anything like myself I prefer to get the best vantage point in any busy environment. I’m also the same in an enclosed area, always looking out for the fire exit or quick route out, part of my training in the past when I was in the security business. So, I sit and observe, scrutinise and scrawl notes in my small gifted pocket pad. A freebie which was attached to an offer I purchased online from Superdrug, it’s not very flattering, infant if anything it’s outrageously feminine.

I acknowledge her presence with a nod, she obliges with a smile and says “did you know that alcohol numbs the brain, no good if you are a writer, and you should consider that young man, especially if you are to be famous”.

Seems strange that Puerto Pollensa has had literary links with the Grand Dame of Mystery, and she lived not 3 miles away from me in her beloved Greenway House perched high above the river Dart, in 1929, she wrote “Problem in Pollença Bay” and a few other short stories whilst staying at the ‘illa D’or’ situated further along the famous Pine walk. It is quite a classy establishment, such as the place is, you dont have to mention the word hotel after it, everyone is aware that the words  ‘illa D’or’ is just that. Once visited by Grace Kelly and often Winston Churchill and the Welsh woman from Darling buds apparently, amongst others, too many far to list or mention.

Martes, nit. Dinner beckons, and after the feeding of the ‘five thousand’ a quick promenade along the beach pathway to walk off our intake of godliness, we decide to call it a day and retire to the cool of our room. Just before we enter the hotel I look up and notice that all the shutters are down on the fifth floor, but all are lights are shining like a beacon in the penthouse on the sixth.

Tucked up in bed, well, laid on top of it actually, we can hear downstairs, which, separated by two floors, featuring in the cafe is a live act, there plays a guitarist with a limited chord repertoire who accompanies a young girl, she shrills and warbles like a strangled dove, after about twenty minutes it would appear that the dove is now in fact dead. At last, everything is quiet apart from the last few revellers having nightcaps, and of course in tomorrows distance the promise of the club banging out those once popular now ridiculous sounds.

“Oh fuck off you daft twat, you and your imagination, what were you writing in that book at that time anyway? … how many sleeping pills have you had? have you double dosed? too much sun more like, get to sleep, we have a long day ahead of us tomorrow.