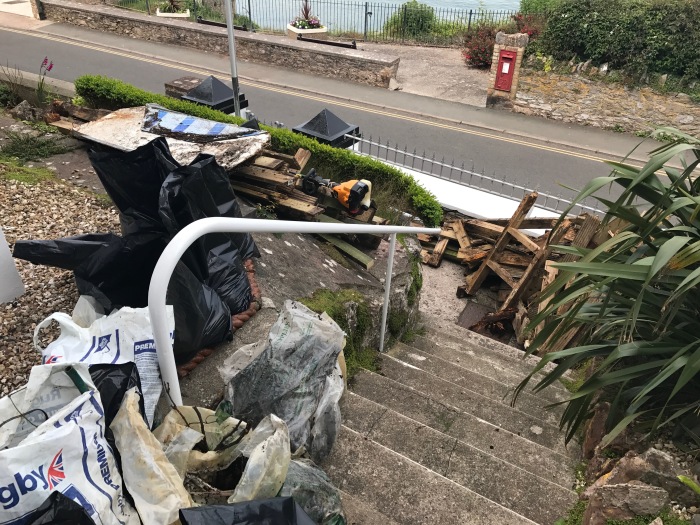 The debris you can see here on my garden and front steps  was originally constructed by my fair hands twelve years ago. It took me hours of virtual planning, nothing drawn up on paper, all measurements settled securely in my head and then actually building a wonderful recreational area in my back yard. You may also remember me telling you a while back about the incident of ‘purchasing’ a showroom ex-display hot-tub?

Out on one of my many adventure days with my dear Dad we ended up in Newton Abbot in an outdoor leisure establishment. Goodness knows why, well, truth is, we got lost looking for a new DIY outlet and had to turn the car around in a scrubby industrial unit area, at the entrance a sign said “cheap swimming pools”, well, we had to go and see this for sure, and my Dad whose humour was very dry and cheeky entered the unit with his usual glow of enthusiasm.

In his broad accent, he asked where the cheap swimming pools were, the sales person said they didn’t have any as such, the sign was just a hook with bait on, which obviously worked as we were pulled in. There were big hot-tubs, small hot-tubs and a tiny eight sided wooden tub which was bubbling away for demonstration purposes in the corner. After swashing his hands about in the warm bubbly water he asked how much it was, it was boldly labelled ‘ex-display’ with the sum of ‘two thousand pounds’ to clear. The salesperson told him it was an old model and had been superseded, Dad puffed his cheeks out and said, tell you what, if it’s still here when I return I will give you a grand for it , (knowing he wouldn’t be back) but, you will have to deliver it free of charge and he headed off towards the door, “a thousand pounds you say” replied the salesman, tell you what, you can have it for seven hundred and fifty pounds, right here and NOW.

‘What the actual fcuk’ I thought to myself, ‘what is he going to do now, got himself in a bit of trouble here, where on earth has he got that kind of money from’  I pulled him to one side, he just smiled…..

So, a few days later, here we are, this huge lorry pulls up outside MY house, “hot-tub” shouts the driver. Yup I reply, (honestly, I mean, what was he thinking?) Looking about and over my shoulders up and down the road hoping the neighbours would see what was going on we watched as this massive crane hooks the tub up on slings and dumps it right on the pavement, he hands me an envelope with loads of paperwork and drives off to his next scheduled stop.

Now this thing is massive, weighs a ton, and it was empty. Checking the instruction manual I managed to work out how to disassemble it backwards, and believe me, it was a nightmare, but the saving grace was, that as it was built like an interlocking log cabin, we were able to carry it piece by piece, and believe me, there were many pieces, we carried them through the house and into my tiny rear courtyard which was a sun-trap. Working late into the eve and all next day we assembled it back to its former original glory, building a lovely decking area around it in the process and made it into an oasis of calm. Dad only used it once, it was on all the time, and with friends and family we had lovely evenings, even sat in it whilst it snowed one New Years eve.

So, whats this got to do with the attached picture I hear you ask?

After twelve years of use and being in a damp humid area, over time nature eventually takes its natural course, rot sets in, suddenly leaks develop and with spiralling maintenance costs disposal was imminent.

This pile of rubble and wood is the rotting detritus of happy times and just going to waste, and although you can throw away material things, the memories that were made and such fun and laughter created that are associated with it are unforgettable and will always remain.